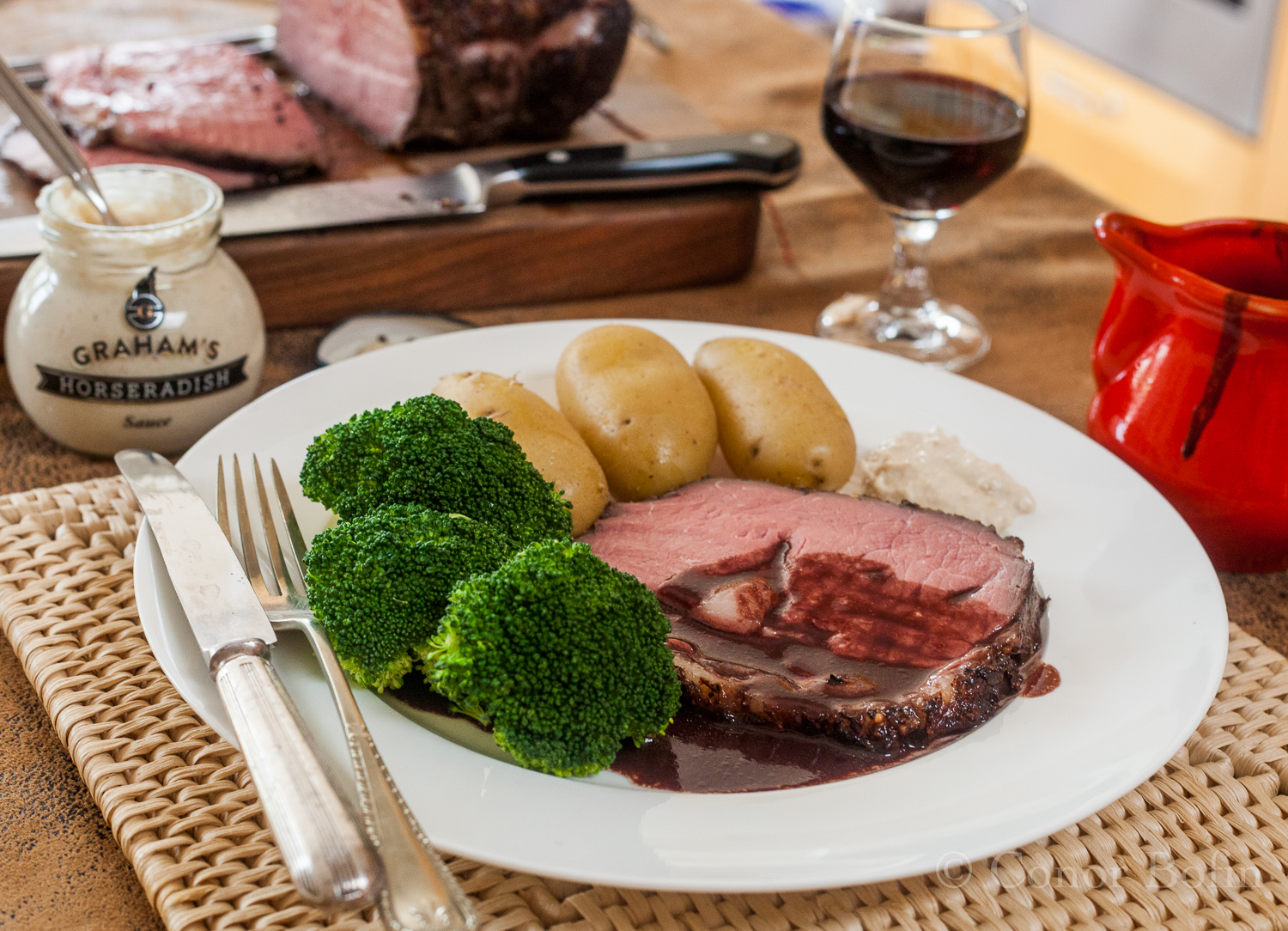 Take pity on the poor Irish blogger. We are a simple lot. We are not used to being regulated. Many of us have been happy to purloin images from around the Internet for our own use, not knowing nor bothered that those images, and the revenue rights appended, are owned by others. The Irish Bloggers group on Facebook has been doing a deal to educate us of late. However, our situation has been made much worse with the news that The Advertising Standards Authority of Ireland has brought us within their compass. Now we have to be upfront when we post for profit. No more can we secretly trouser a few quid and say that we love those gravy granules. We have to say clearly and unequivocally that we are in receipt of funds for saying the glorious things about those hateful globs of granulated gunge.

But, what do we do when we get free stuff? Lots of us are happy to blog for the free stuff alone. How else would the family eat? I found myself tossed into this particular arena of controversy when my cycling buddy and butcher extraordinaire James Lawlor gifted me a sample jar of Graham’s Horseradish Sauce.

Side note on getting paid for the nonsense I write here: It’s difficult enough to get James to buy a round of drinks after a long day riding our bikes around the Wicklow Mountains. Any thought of him paying me for this dirge is bordering on the laughable. Having said that, he is one of the best butchers left in Dublin and I highly recommend his shop, Lawlor’s of Rathmines.

“So, where’s the problem with the free jar of Horseradish?” I hear you say. I didn’t get paid for including it. So I can say it was wonderful and tasty and all that (which it was) without the overlords of communications etiquette coming down on my case. However, I have derived some Benefit in Kind from the jar and the Revenue Commissioners may have something to say on that. Given that I am a top rate taxpayer (not difficult to achieve that accolade here in Ireland), I could be liable to give half of any benefit in kind over to the government. They are not likely to be happy to receive a half jar of Horseradish in the post. No, they will want the value of a jar of horse in tax (The jar being 50%, the price of it being the tax on it). Things don’t get any better. If I did get paid for including it in my post, I would owe the Revenue half that money. It’s just not worth the trouble.

With all that said, here’s a recipe for Sous Vide Beef Rib with Red Wine Reduction. As you can see I served it with free(ish) Graham’s horseradish sauce. 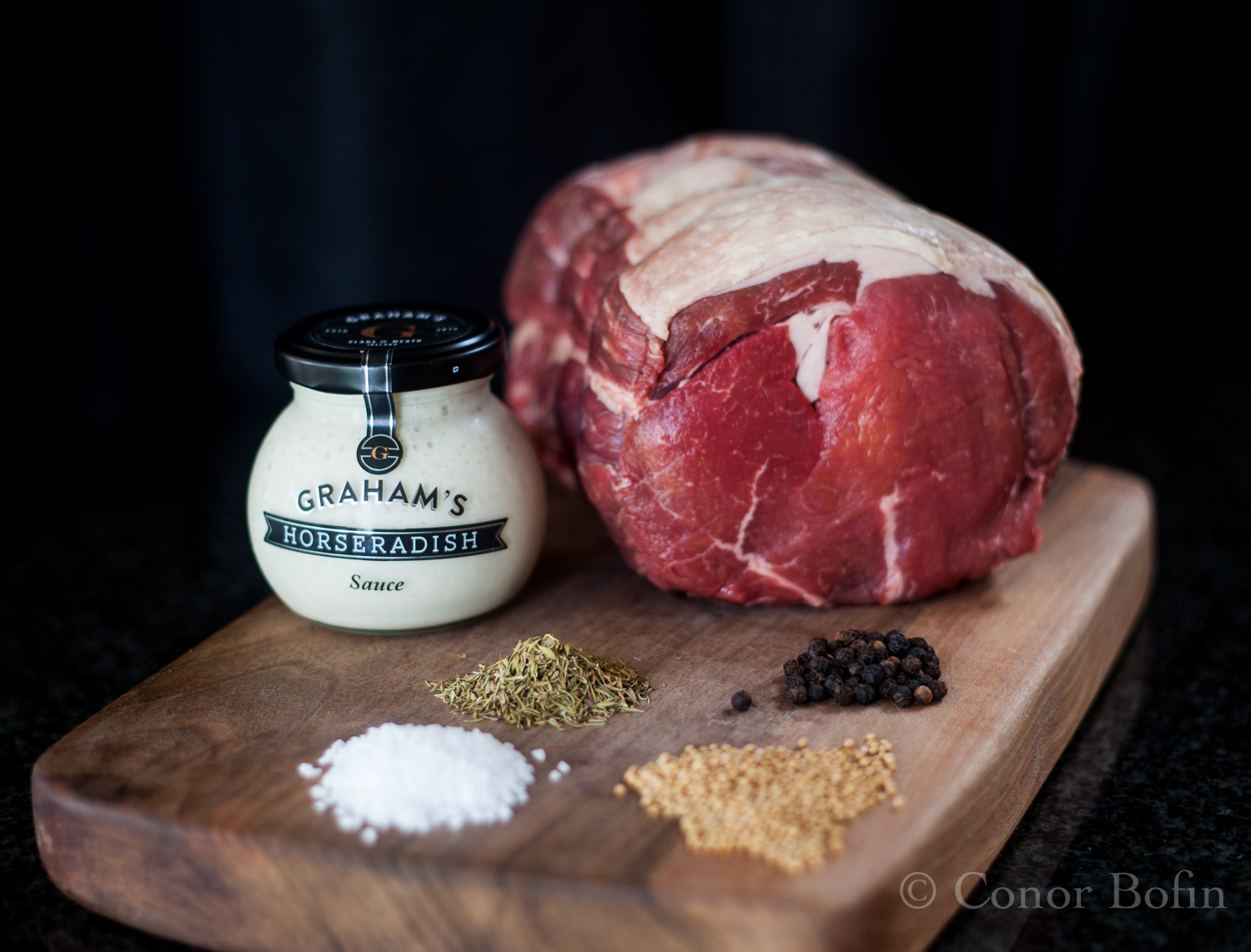 Not a lot of ingredients. I promise I paid for them all except the horseradish.

The first thing to do is to grind the salt, pepper and mustard seed until cracked and coarse (somewhat like myself). 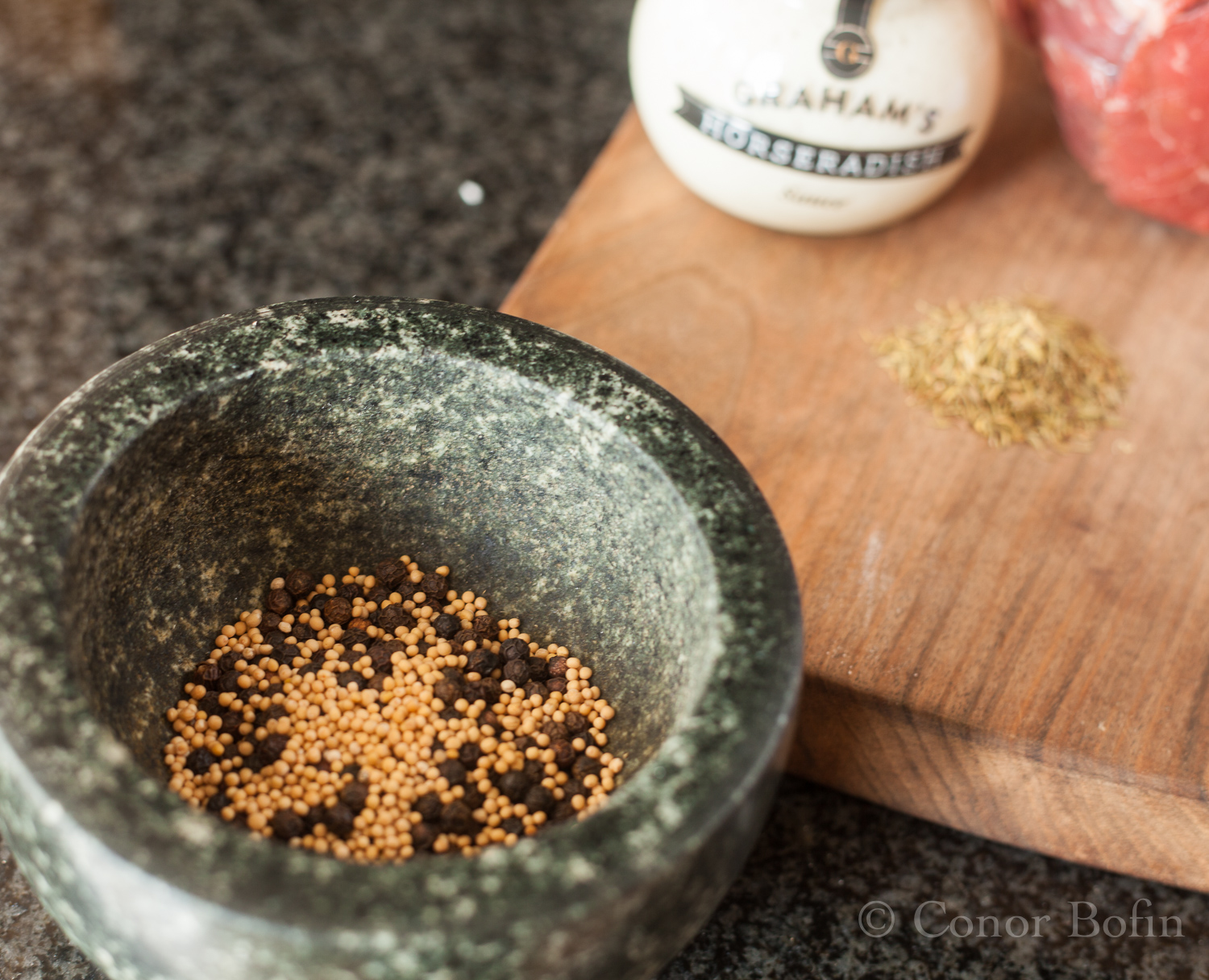 If I’d been paid, I could have charged extra for the subliminal (out of focus) branding.

Rub the beef all over with the mixture. Most of it will stick. 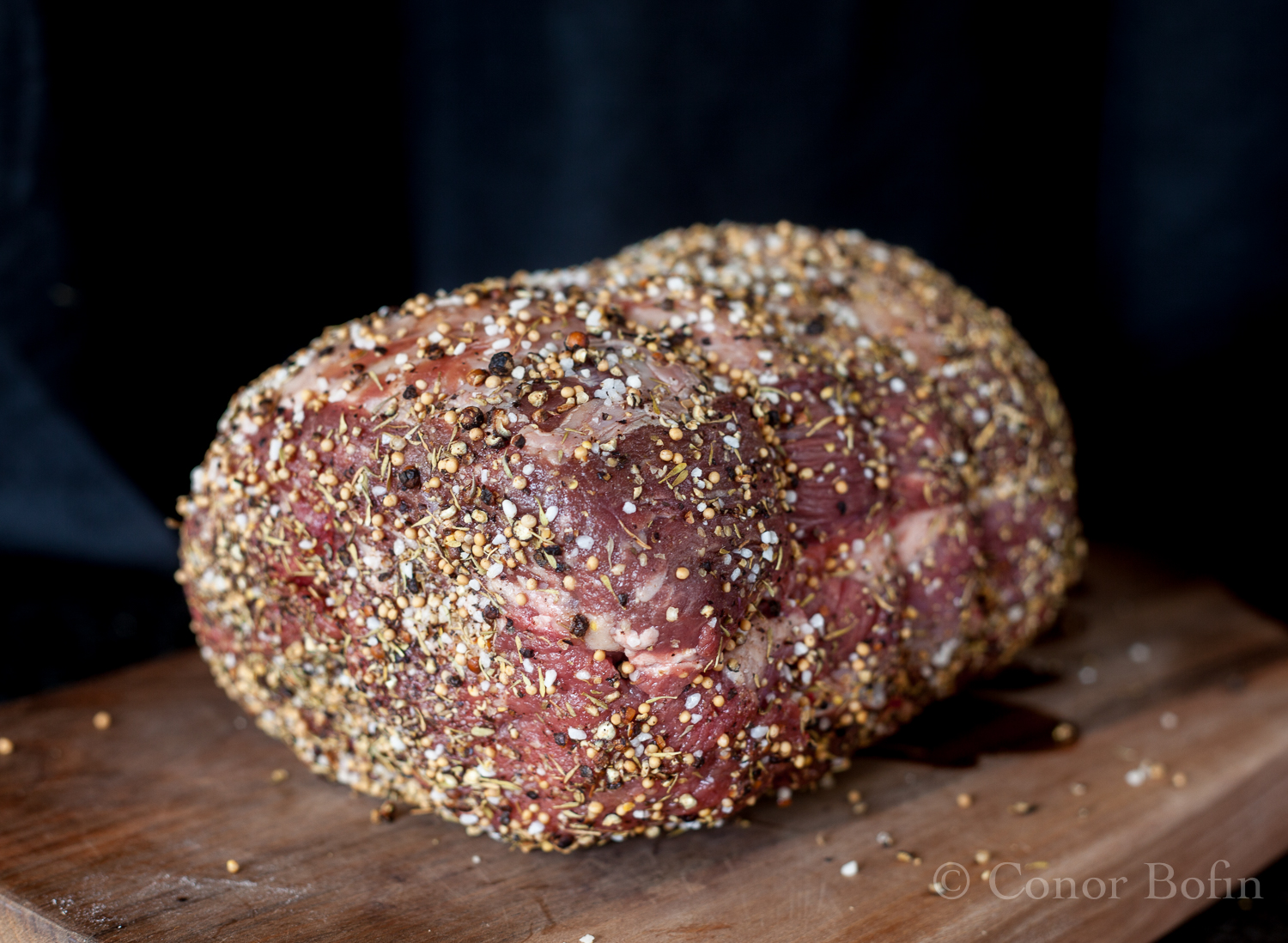 There’s a lot of flavour in those seeds and stuff.

Side note on the beef: This is quality Irish ‘grass fed’ beef. The factory bred nonsense sold elsewhere in the world will probably take longer to cook at a higher temperature. It won’t taste as good as this. It just can’t because the meat is second-rate.

Vacuum seal the beef and put it in your sous vide bath for ten hours or so at 55ºC. Time depends on the size of the cut and temperature determines the degree of doneness. 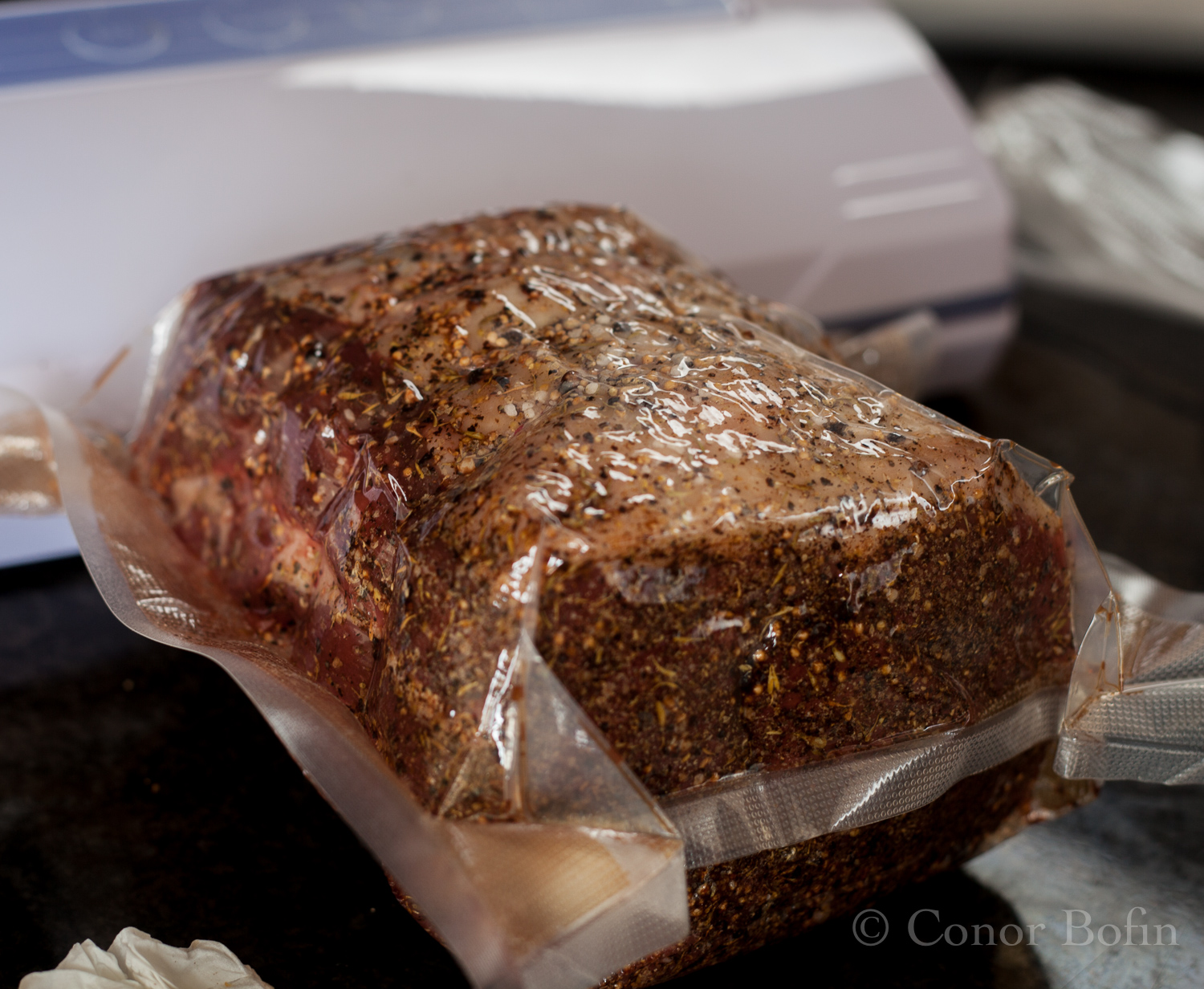 Seal in the flavours of those spices.

When the beef is cooked, remove it from the bag and pat it dry. Brown it on a hot pan. You could do this with a blowtorch (I know a former chef who delights in doing this with a welding gun) or on the barbecue. 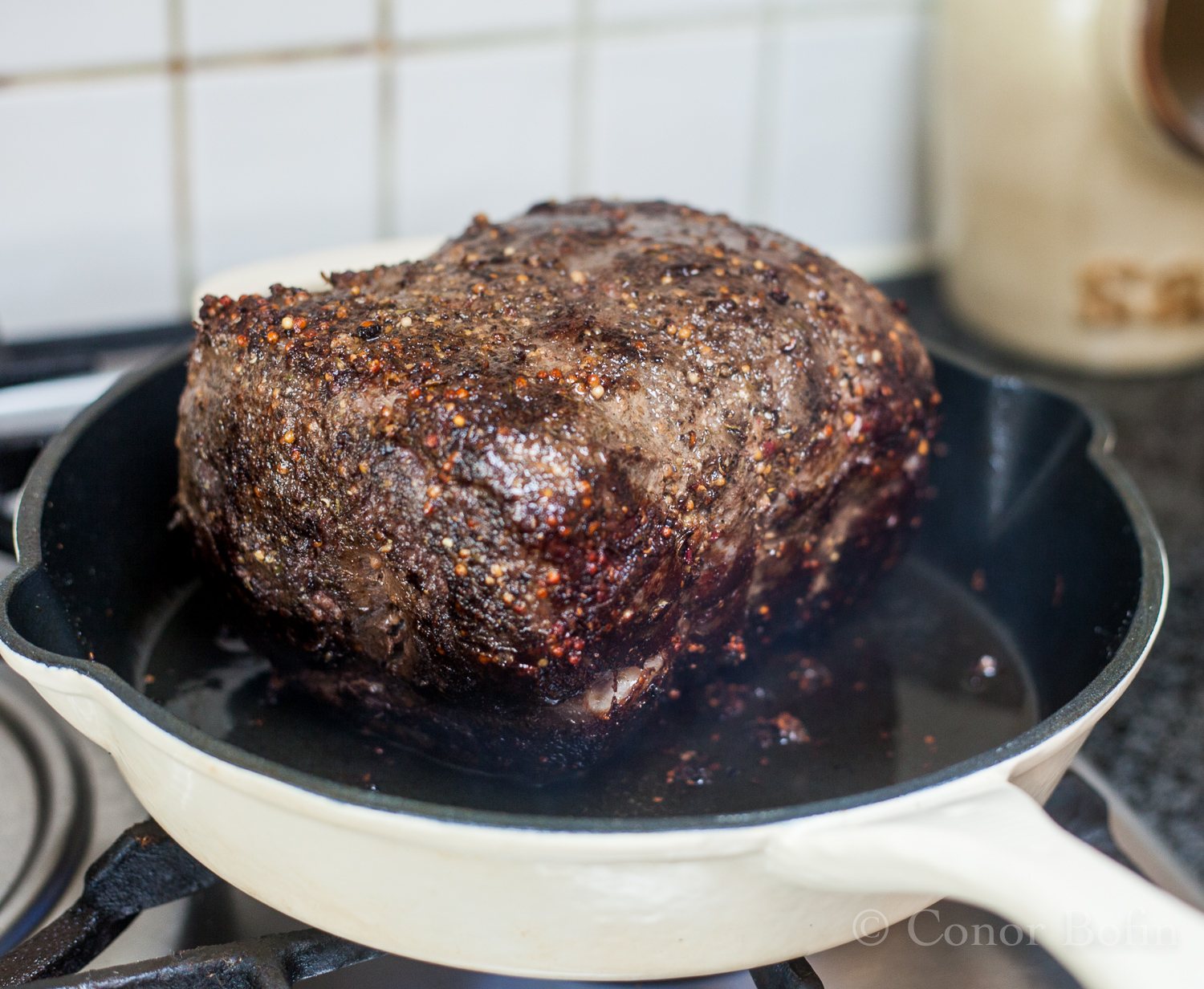 I nearly needed a bigger frying pan. If only somebody would ‘gift’ me one….

While this is doing, pour the bag juices into a separate pan. 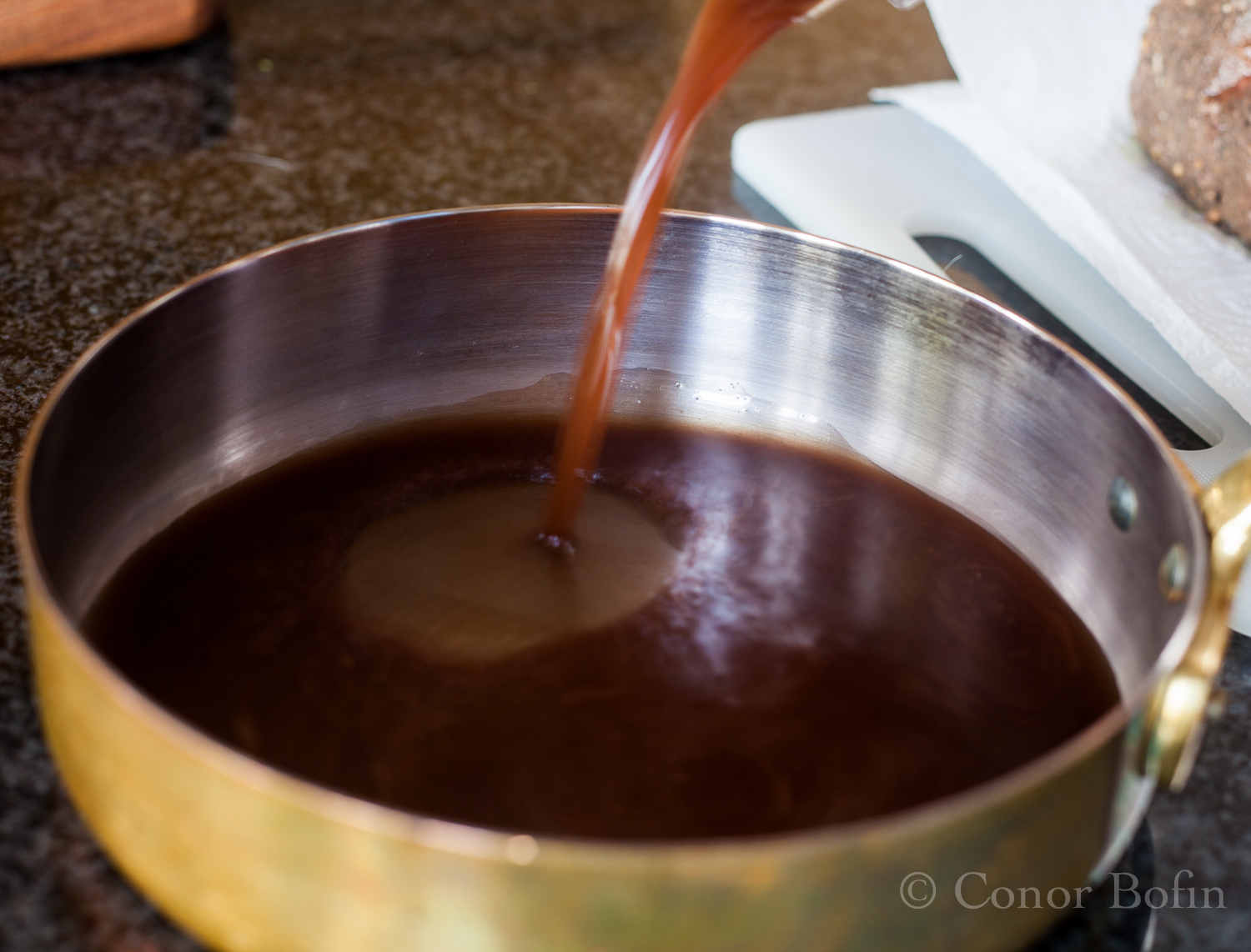 The bag juices look nice and clear. Just as clear as our tax and honesty rules….

Heat the juices up and they will go all murky and opaque. 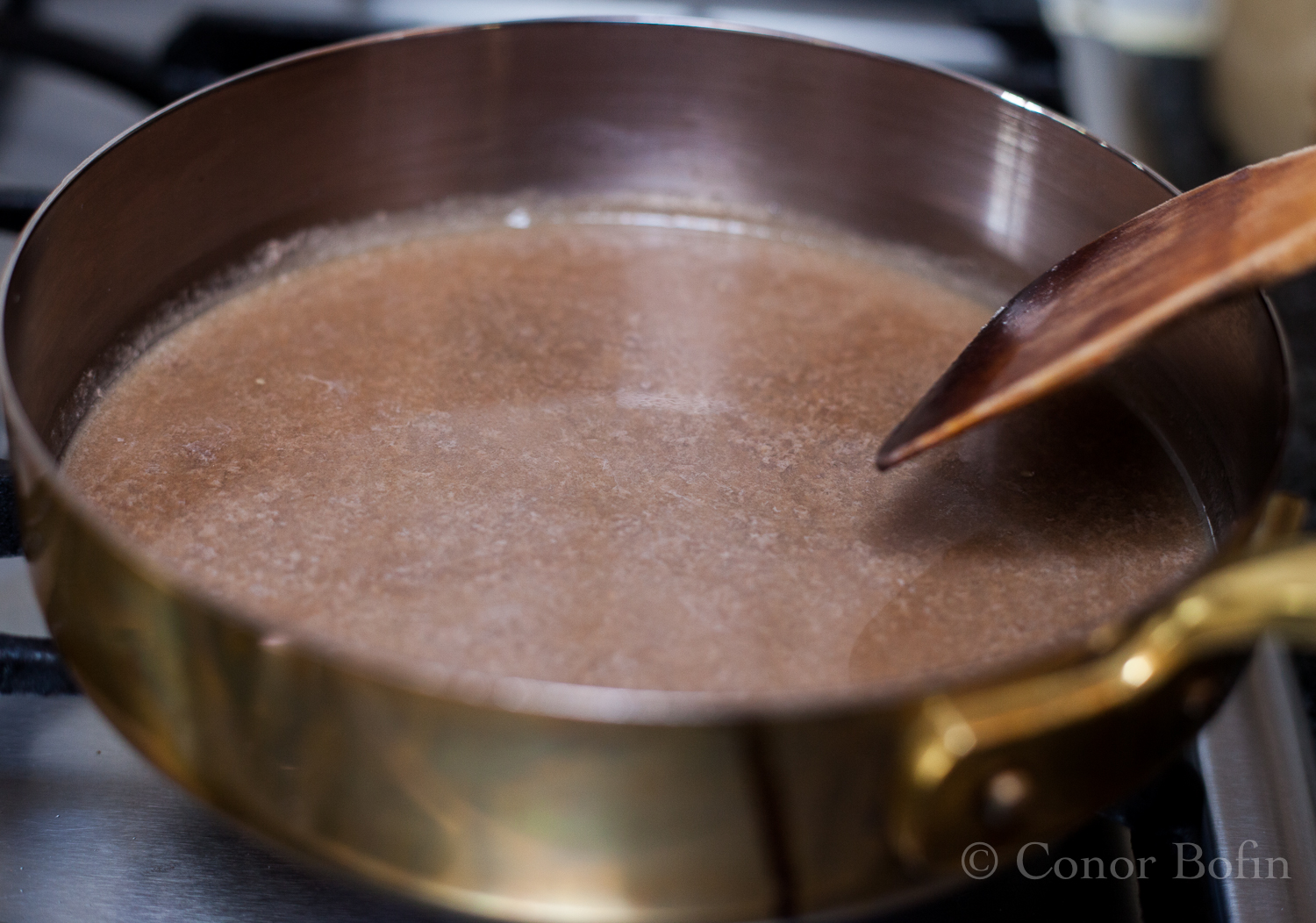 Strain this through muslin. Wash the pan. Add the wine. Add back the strained juices. 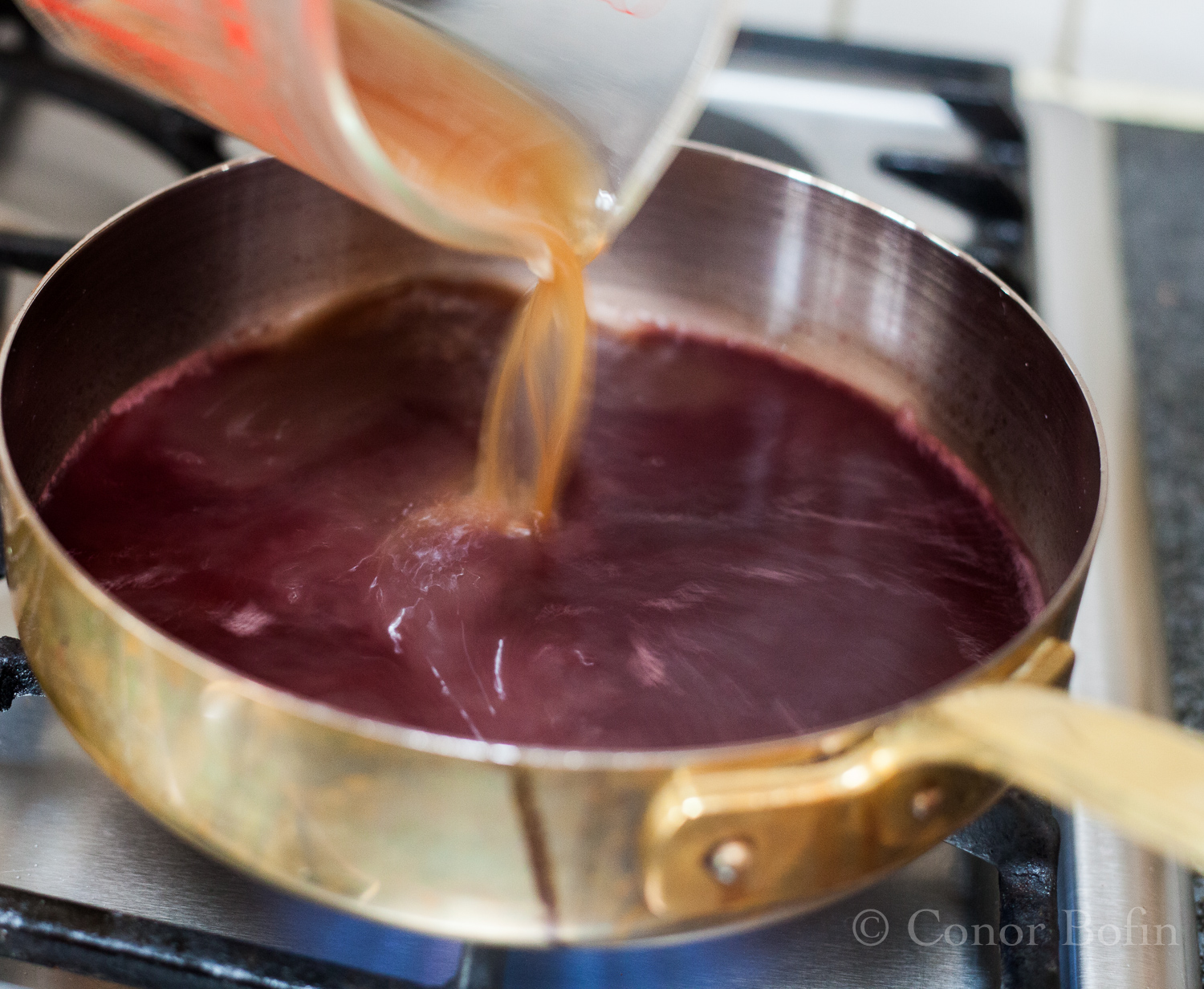 Clarified juices being poured. Admit it, you depend on me to clarify things.

Reduce the sauce by 50%. Think of it as the 50% you owe to the Revenue Commissioners. Then add a knob of butter and stir it in, it makes the sauce and the thought a bit more palatable. 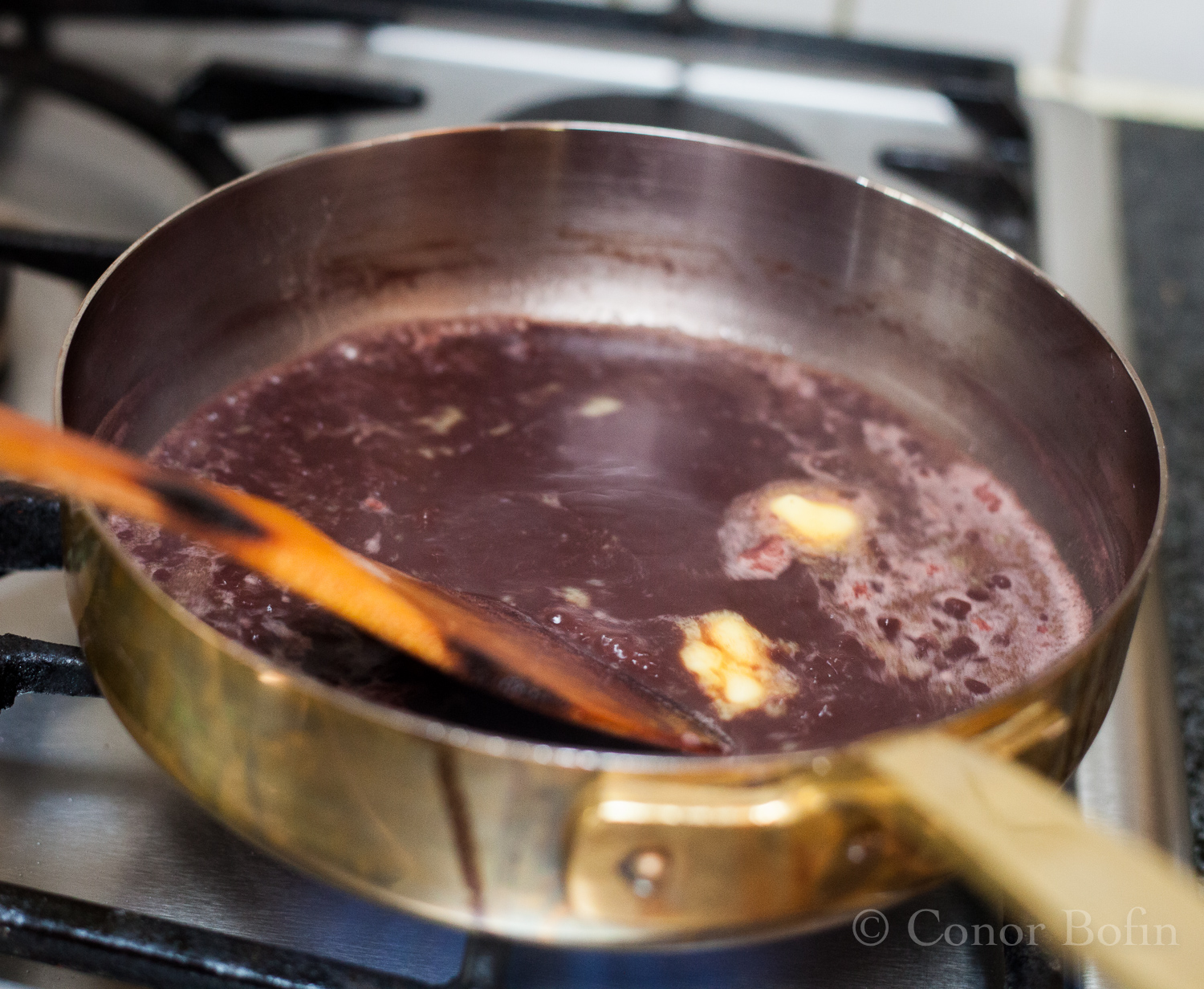 The butter makes the sauce thicker and tastier. 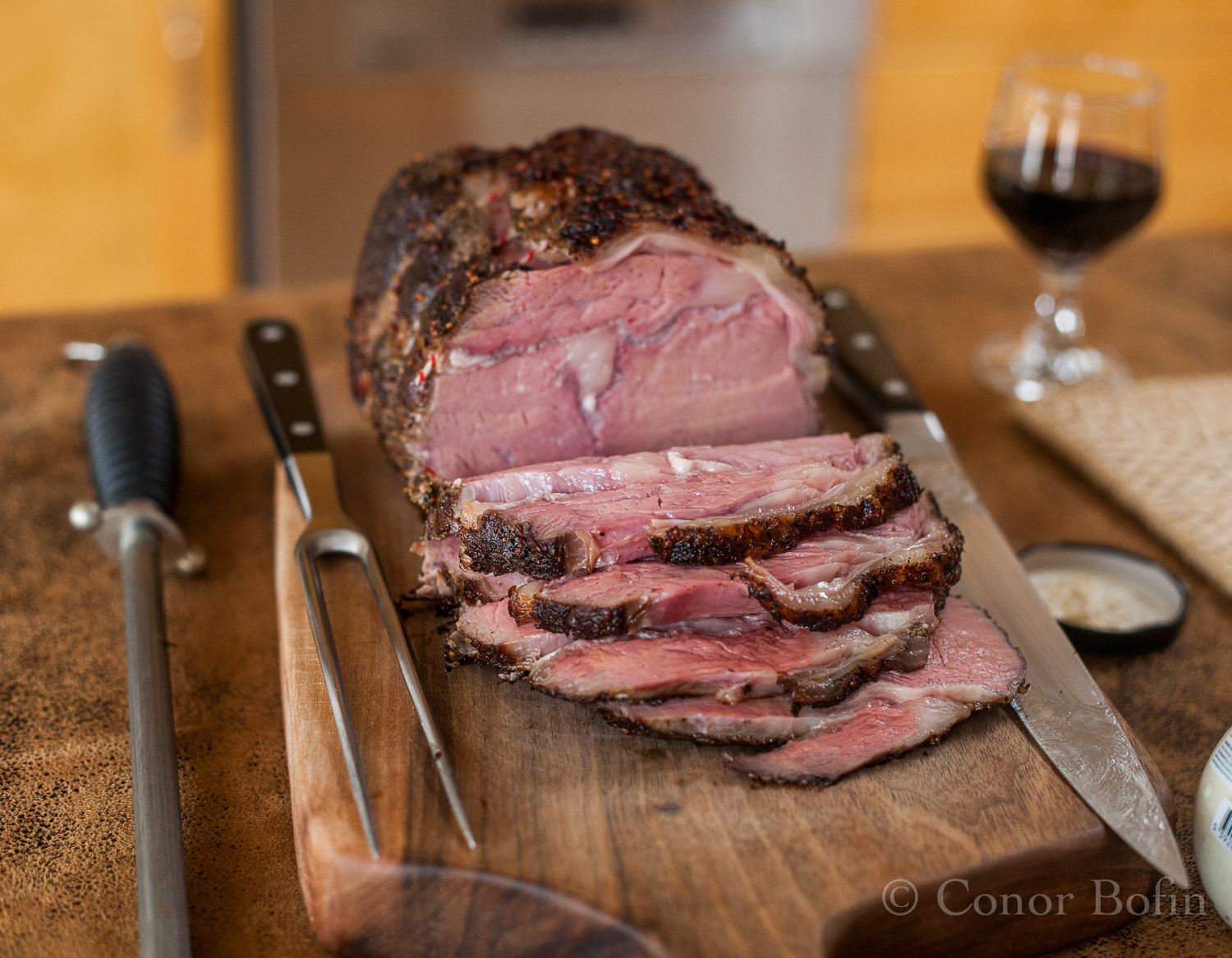 Serve the beef with in nice slices with the sauce, some vegetables and a nice dollop of the horseradish sauce. There’s nothing taxing about this particular meal.

I usually do my tax return in or about October. I must remember to include a jar of Graham’s in the envelope.

Footnote on Irish blogger regulation: The rules around blogging are pretty straightforward. If you get paid, you have to be up-front about it. You also have to pay tax on the income. If you get ‘free stuff’ you don’t. But, you are in danger of having to pay tax on the benefit in kind. No matter what, you should be honest, open and clear. Everybody involved, including the client should be happy about that. If they are not, they probably have something to hide and you shouldn’t be putting your reputation on the line for them. If you use somebody else’s images , video or copy for your blog, they are entitled to charge you. If you use my images, I’ll hunt you down and sell your carcass to pay my taxes. You have been warned.

This site uses Akismet to reduce spam. Learn how your comment data is processed. 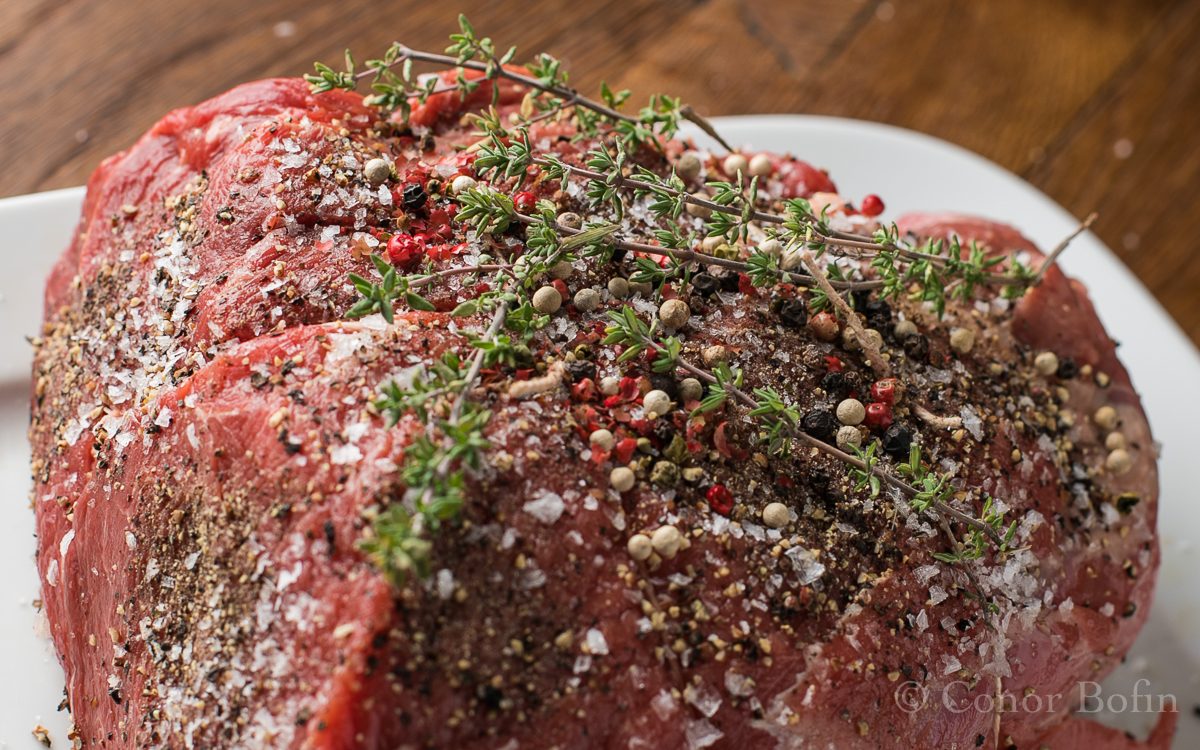 Butchers! Get Behind Sous Vide. 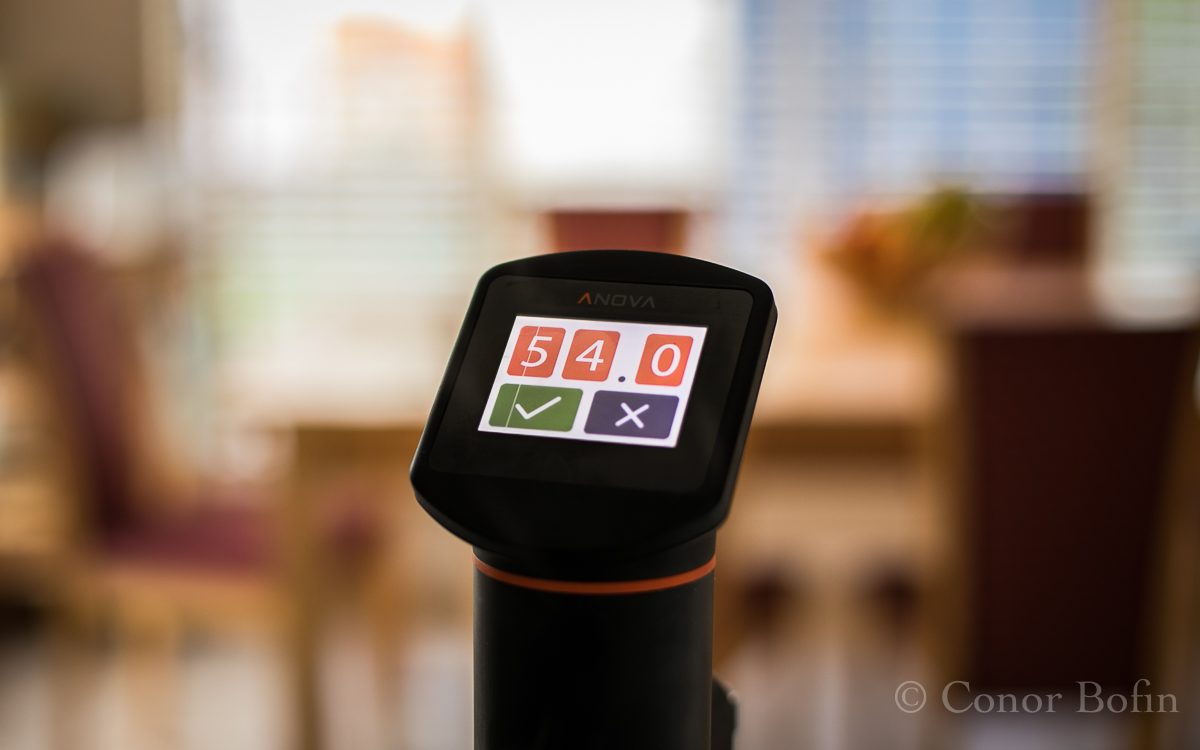 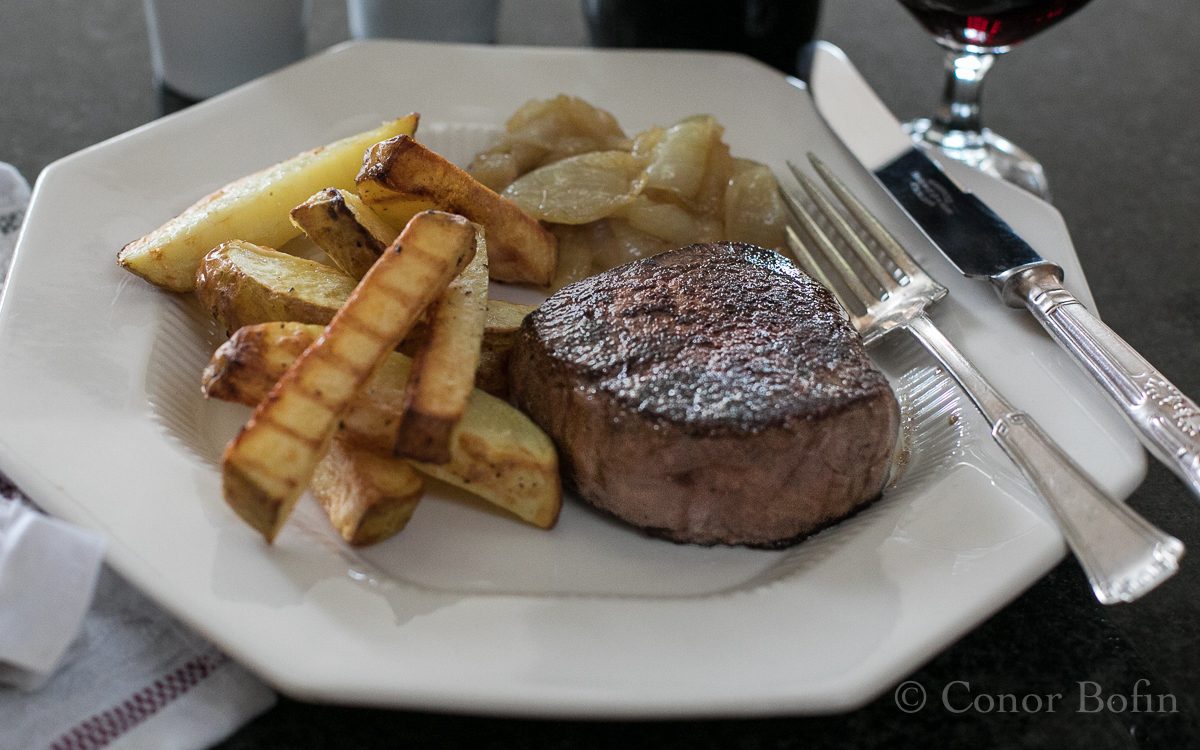 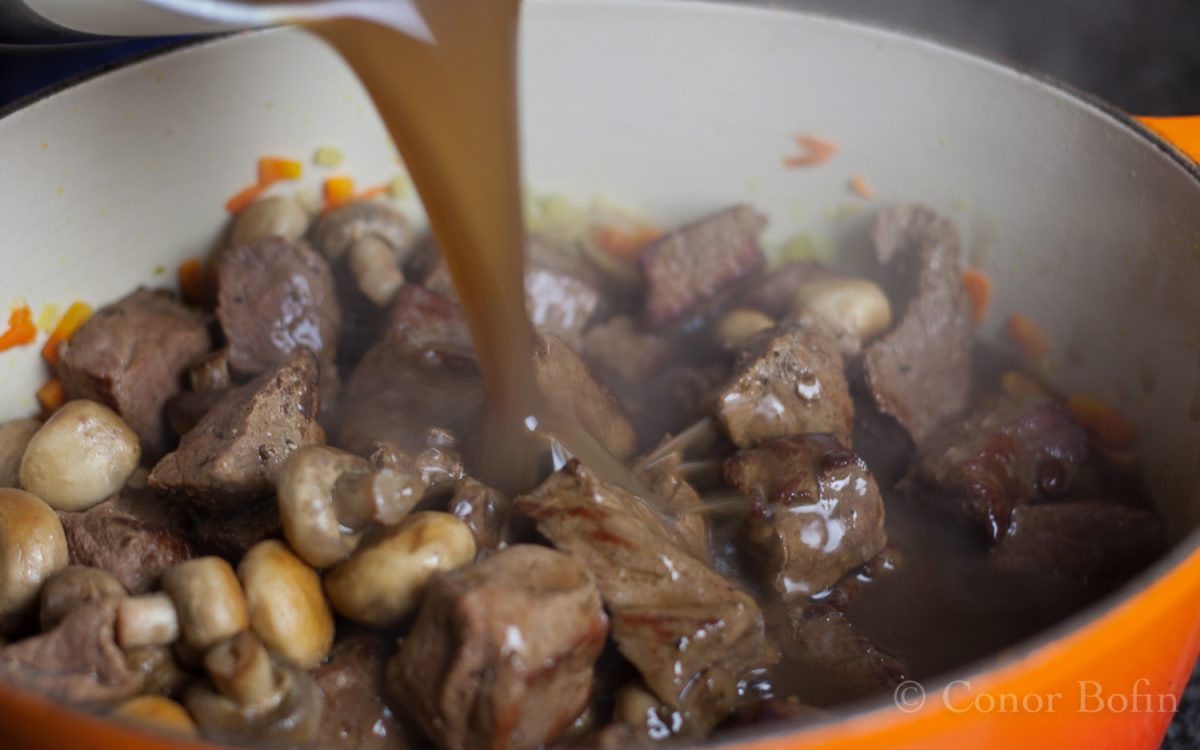 “Seek and you will find…”

I’d rather not be so popular. It couldn’t be my chicken and pancetta pie, could it?

Economic warning – DO NOT cook beef short ribs on a bed of garlic served with red wine reduction and celeriac mash.

The Dreaded Sausage Roll – Another reason to hate Christmas.

Spiced Beef and the Spoiled Brat. 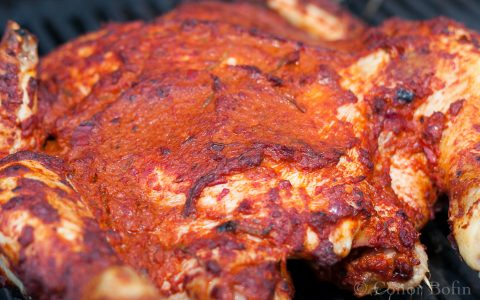 The McGary Chili Challenge – An attack on European harmony?

Easy oriental part 9 – Prawns with honey, chili and green beans even though you don’t deserve it.

Irish Seafood Chowder and Scones. Saint Patrick would be turning in his grave.

Mince pies and why I hate Christmas 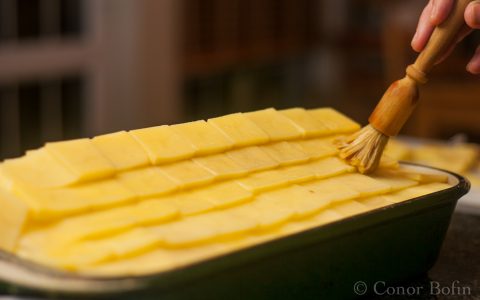 The Long and the Short of Oriental Short Ribs

Wagyu Beef On The Rack

Glorious Beef Burger – The Way of the Wagyu

My Beef With Tomatoes – A Sous Vide Story

Red Cooked Short Ribs – If You Can Find The Ribs.

Beef Short Rib Stew – Would You Marry Your Butcher?

Butchers! Get Behind Sous Vide.

Vegetarian Lamb Stew – No, Not Yet.

Lamb for Easter – Now I’m Off!

An Idiots’ Guide to Oriental Lamb Shanks with Sauce

Lamb and Cumin Burgers – The Sun is Shining Somewhere

Lamb for Easter? – Not In Our House.

The Long and Short of Balsamic Lamb Shanks Sous Vide

‘Creative Rationale’ for Pork with Figs and Lardo

The Joy of Covadonga – Sausage, Pork and Bean Stew

7 Hour Coffee Roast Pork – Thanks All Around

What Fortnum & Mason don’t want you to know.

Pork and Plum Sauce – A Bargain Works Out Well

Steamed Cod With Ginger and Spring Onion – No Apology

How I became an honorary Italian. National Fish and Chips Day.