The True Story of The Field Marshal’s Ham Wellington.

Field Marshal Arthur Wellesley, the first Duke of Wellington and the man who famously led the British force that defeated Napoleon in the Battle of Waterloo, was an Irishman. As an aside, the poor chap had nothing to do with the Beef Wellington that many believe has been named after him. He, being an Irishman, enjoyed (afforded) pork rather than beef. Being a wealthy Irishman, he was able to afford pork fillet rather than crubeens (pigs feet) and regularly dined on same. The problem with all pork meat back then was that it didn’t keep particularly well. It certainly was no good to bring on a long trip into enemy territory.

Army food back then was not the delight that it is today. The good Field Marshal Arthur devised a solution to this problem. He decided that he would make his own bacon and bring it along, concealed and protected  in his oversized, waterproof boots. Being as wealthy as he was, he insisted on having the fillet of pork cured, wrapped in kale (it was popular back then) and the whole lot wrapped in pastry to keep it moist and fresh. Before each campaign he would instruct his regimental chef to prepare a brace of fillets, one to fit inside each of his boots. Hence this recipe for the, previously unheard of, Field Marshal’s Ham Wellington.

Like any good military strategist, you will need to start your preparation a few days before you go into battle. Start by trimming the tenderloin. 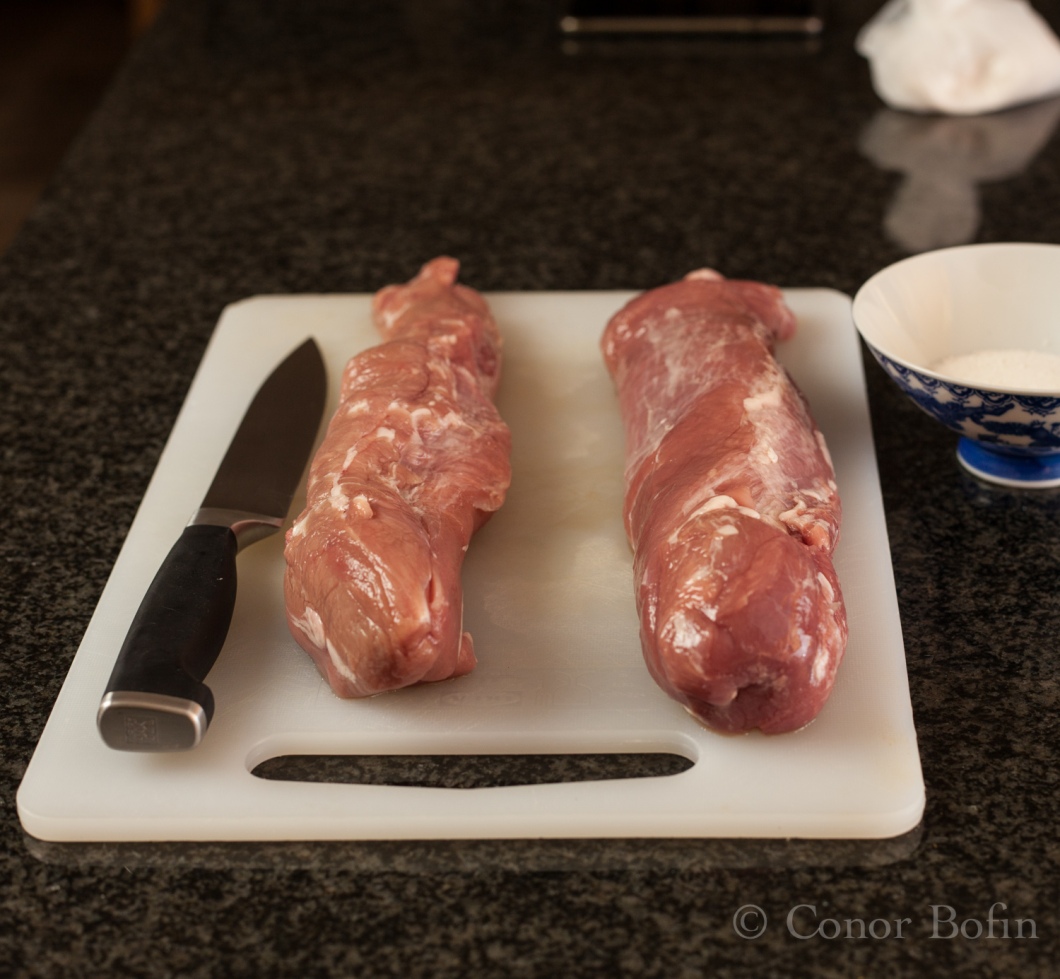 Trim the membranes and any spare bits of fat. We need the salt to get into the meat.

Then rub the tenderloins with curing salt. Don’t use too much. Get advice from your butcher on quantity (I did). 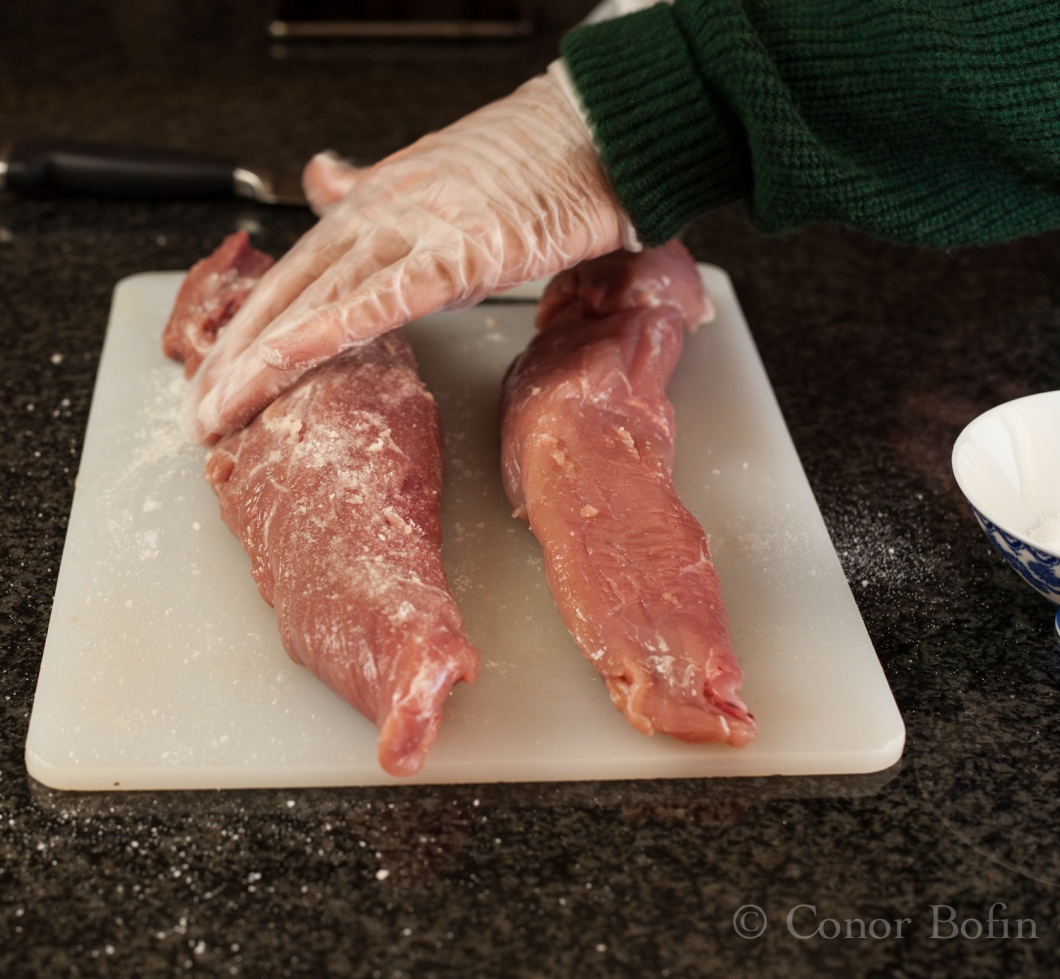 I am wearing a glove as I trimmed myself as well as the tenderloin. Ouch!

Next, wrap the tenderloins in cling film and place them in the bottom of the refrigerator. Leave them there, untouched for 5 days.

Wrap the tenderloin nice and tight. We don’t want much air in there.

On the day you plan to go into battle, or serve your guests, take the pork out of the fridge. Trim the kale of its stalks and any bits that are going to stick in one’s teeth. 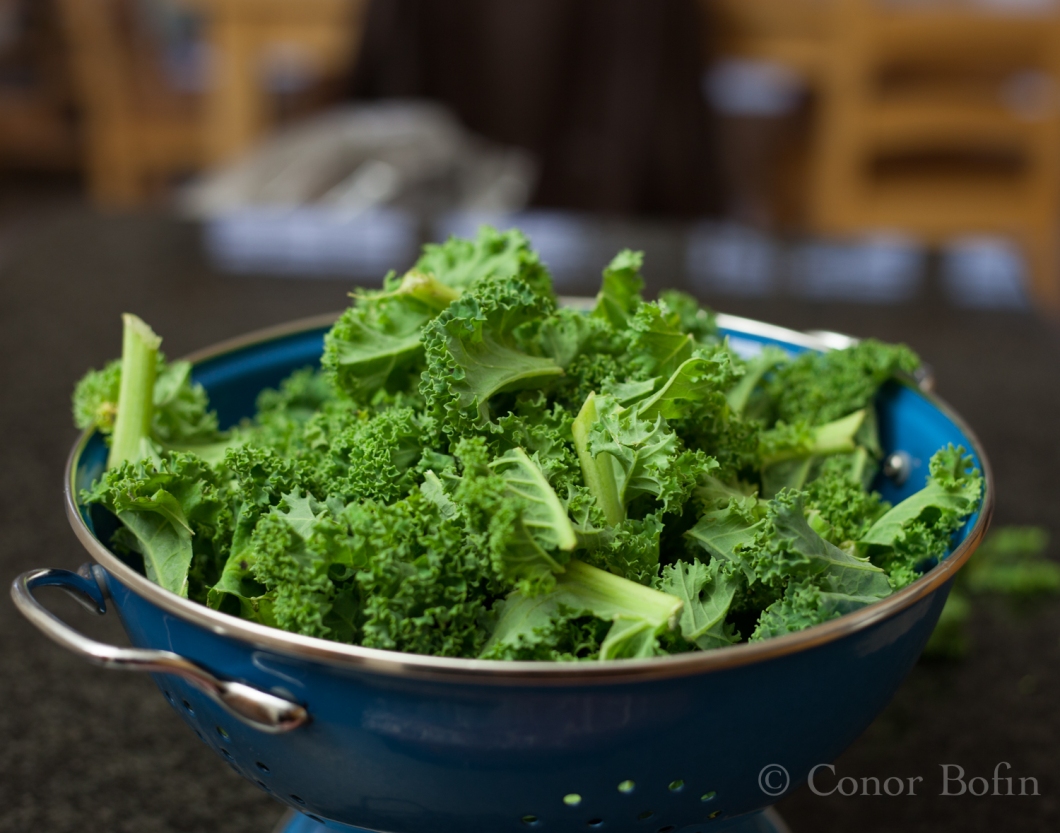 There is lots of trimming to do on the kale.

The kale adds a nice earthy flavour to this. It also helps keep the pork moist. When you have trimmed the kale, chop it up nice and small. Then fry it in a large pan with a bit of oil.

The cooked kale. It’s cooked when it reaches a high green colour.

Lay out the pastry. Make up the English mustard.

Side note on modern day mustard: Colman’s is the standard by which all powdered mustards are measured. They, like every other mustard manufacturer that occupies supermarket shelves have wimped it on their pre-made stuff. It is insipid and lacks any real kick. The powder makes up for that.

Make it nice and strong. It needs to be noticed in the heat of battle.

Smear the pastry sheets with plenty of mustard.

Straight down the middle will do for the mustard.

Cover the mustard with a layer of kale. 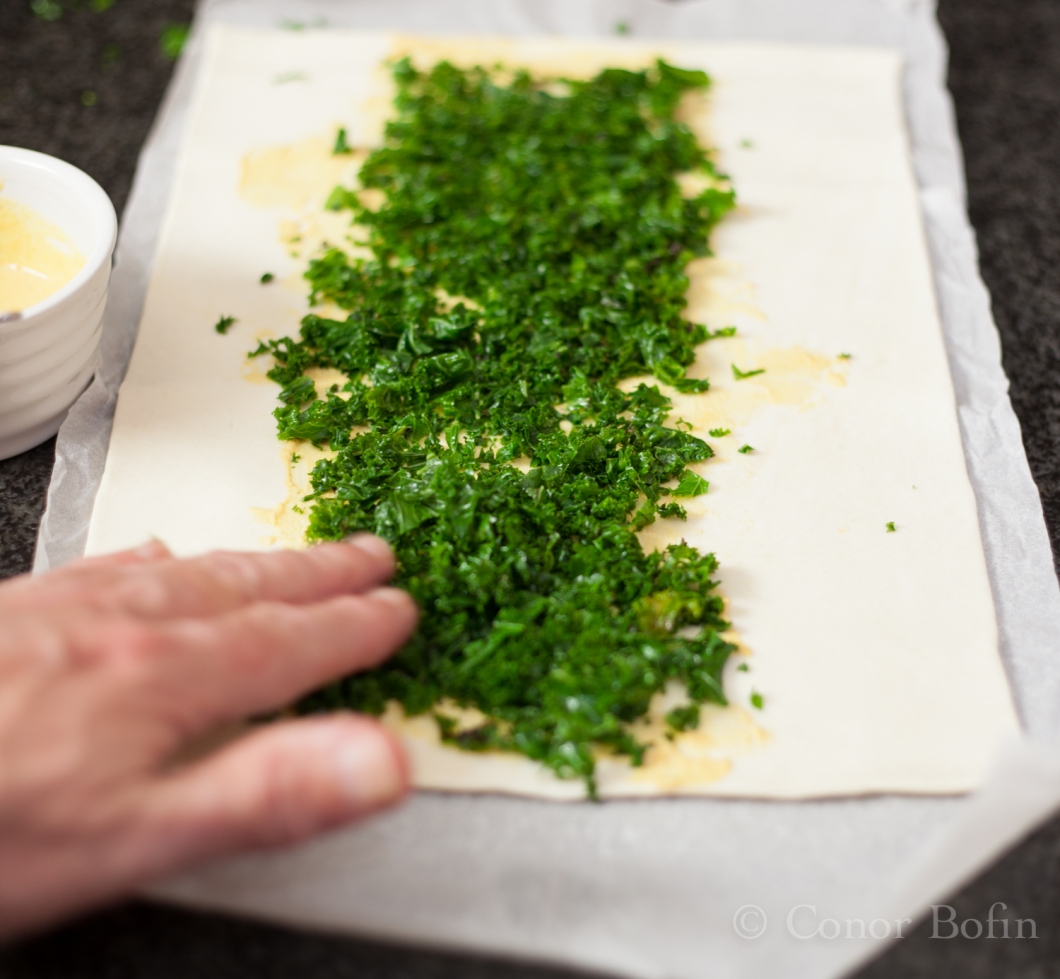 Make it a bit wider than the tenderloin. That way, it gets wrapped in kale.

Lay on the tenderloin and sprinkle more kale on top. 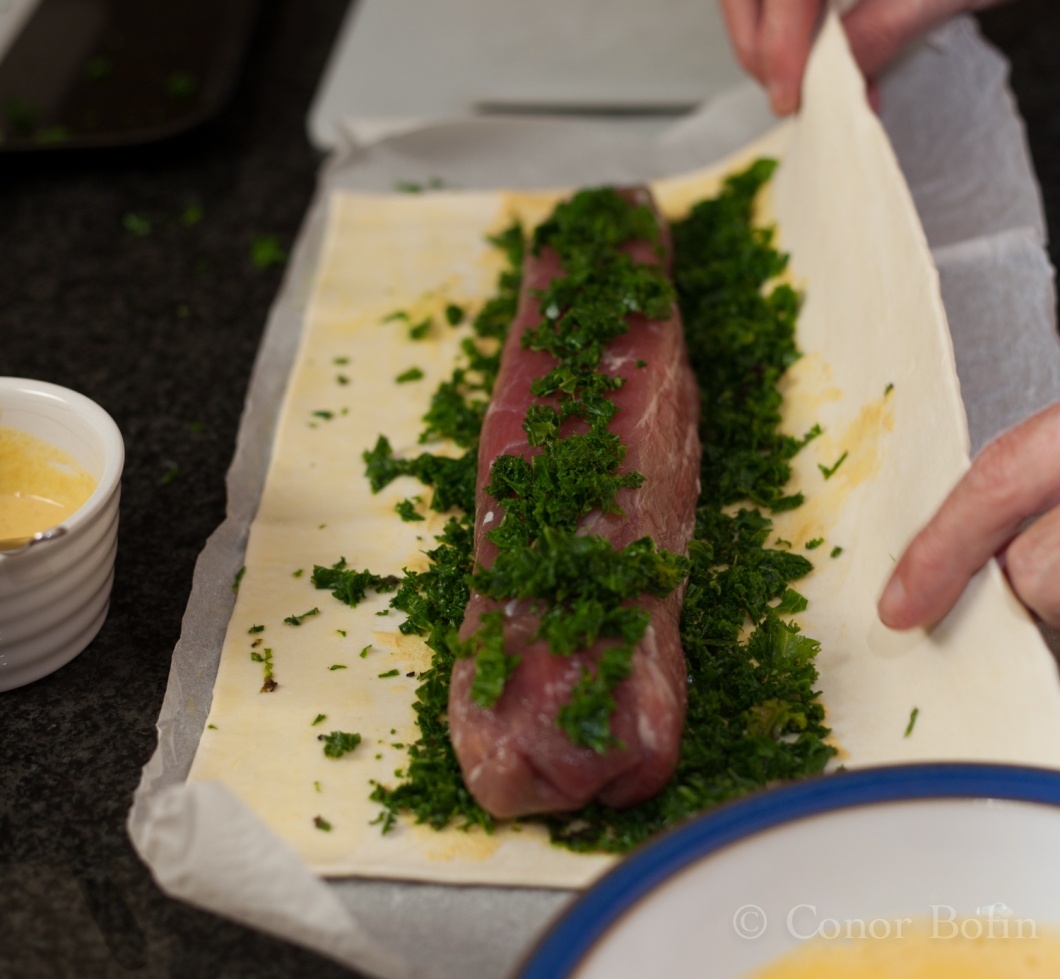 Wrap it carefully to get kale all over. 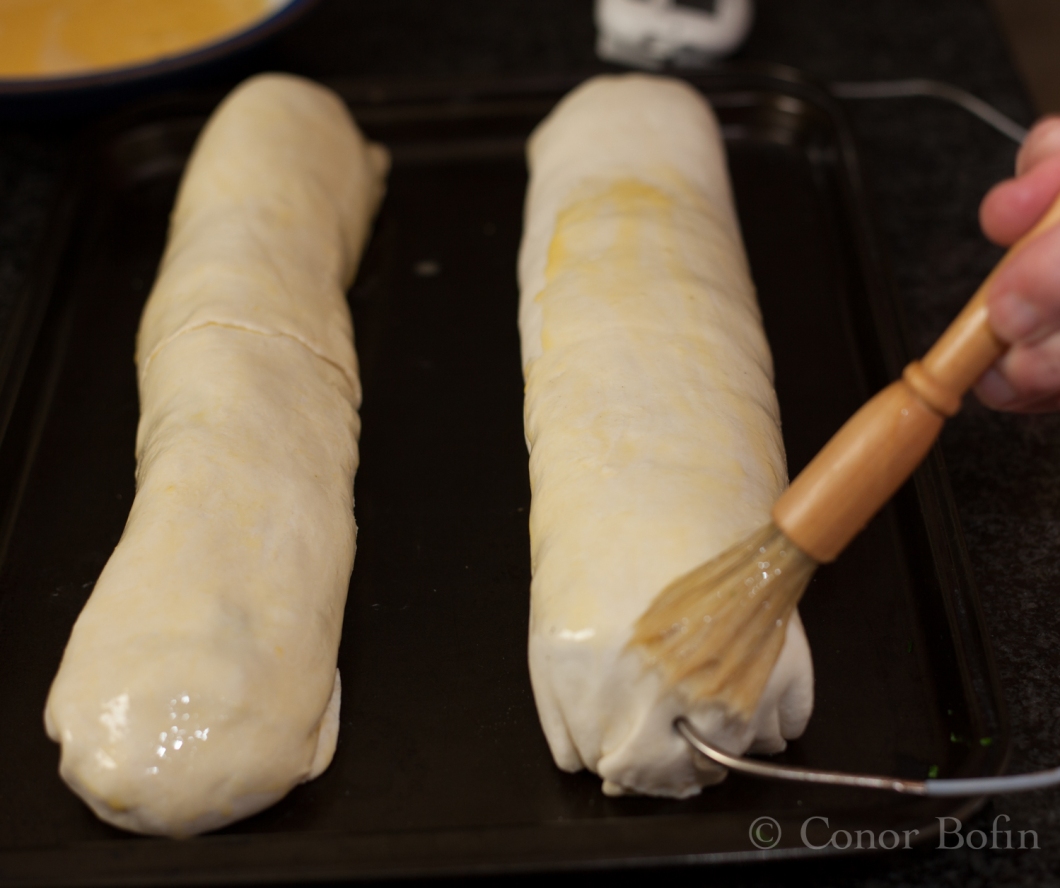 Painted with egg and with the probe inserted.

The Wellingtons worked out really well and they were tasty to boot!

I might wrap them tighter the next time. Trust me, there will be a next time.

The finished dish was delicious with boiled potatoes and some traditional parsley sauce. 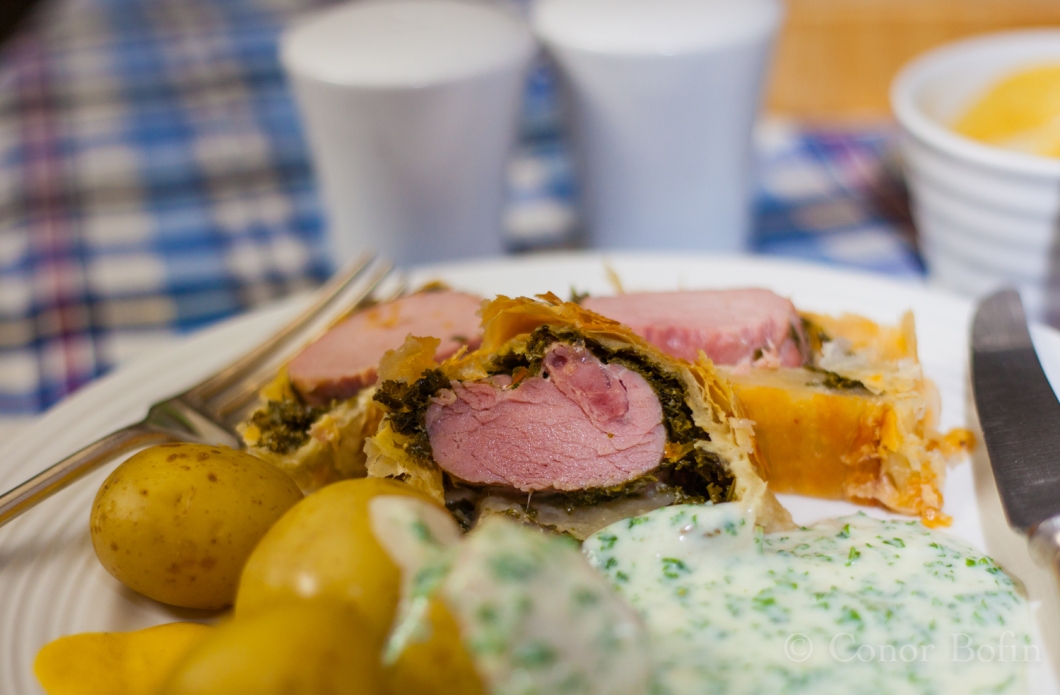 A big dollop of extra mustard for me please!

This was just as delicious served on a plate as it would have been back in the 19th century, being eaten, straight from the boot, by Wellington as he sat astride his charger. I can picture him munching this as he watched Napoleon, across the battle field of Waterloo, through his looking glass. What was Napoleon eating? Well that’s an entirely different story and for another day.

Another Christmas - Another Mince Pie Fiasco!

Join the conversation, you know you want to.... Cancel reply

This site uses Akismet to reduce spam. Learn how your comment data is processed.

“Seek and you will find…”

I’d rather not be so popular. It couldn’t be my chicken and pancetta pie, could it?

Economic warning – DO NOT cook beef short ribs on a bed of garlic served with red wine reduction and celeriac mash.

The Dreaded Sausage Roll – Another reason to hate Christmas.

Spiced Beef and the Spoiled Brat.

The McGary Chili Challenge – An attack on European harmony?

Easy oriental part 9 – Prawns with honey, chili and green beans even though you don’t deserve it.

Irish Seafood Chowder and Scones. Saint Patrick would be turning in his grave.

Mince pies and why I hate Christmas

The Long and the Short of Oriental Short Ribs

Wagyu Beef On The Rack

Glorious Beef Burger – The Way of the Wagyu

Beef Short Rib Stew – Would You Marry Your Butcher?

Black bean beef in 30 minutes (including the washing up)

My Best Ever Lamb Shank Recipe

Vegetarian Lamb Stew – No, Not Yet.

Lamb for Easter – Now I’m Off!

Lamb and Cumin Burgers – The Sun is Shining Somewhere

‘Creative Rationale’ for Pork with Figs and Lardo

What Fortnum & Mason don’t want you to know.

The Joy of Covadonga – Sausage, Pork and Bean Stew

7 Hour Coffee Roast Pork – Thanks All Around

Not Many Will Enjoy Rack of Suckling Pig.

Don’t take it seriously. I’m only ribbing you.

Steamed Cod With Ginger and Spring Onion – No Apology

I have the beer. Let’s go on the batter.